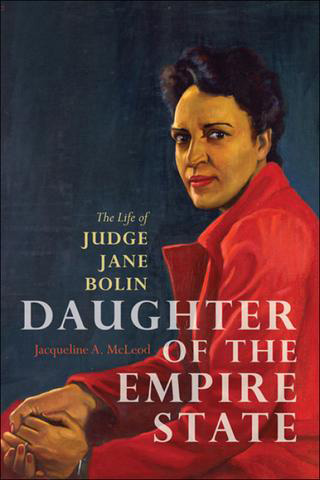 Daughter of the Empire State by Jacqueline McLeod

Jane Bolin’s appointment as a family court judge by Mayor Fiorello H. La Guardia in 1939 made her the first black woman in the United States to become a judge.

In January 1979, when Judge Bolin had reluctantly retired after 40 years as a judge, Constance Baker Motley, a black woman and a federal judge, called her a role model.

Her father, who was the first black graduate of Williams College, had his own legal practice and was president of the Dutchess County Bar Association. His daughter grew up enamored of his shelves of leather-bound books on the law. But her comfortable girlhood was profoundly shaken by articles and pictures of lynchings in Crisis magazine, the official publication of the N.A.A.C.P.

“It is easy to imagine how a young, protected child who sees portrayals of brutality is forever scarred and becomes determined to contribute in her own small way to social justice,” she wrote in a letter at the time of her retirement in December 1978.

She attended Wellesley College, where she was one of two black freshmen. They were assigned to the same room in a family’s apartment off campus, the first instance of many episodes of discrimination she said she encountered there.

At her graduation in 1928, she was named a Wellesley Scholar, a distinction given to the top 20 students of the class.

When she broached the subject of a law career to a Wellesley guidance counselor, she was told that black women had little chance. Her father also discouraged her at first, saying that lawyers had to deal “with the most unpleasant and sometimes the grossest kind of human behavior.” Unbeknownst to her father, she had already been admitted to Yale Law School, and he eventually agreed to her career choice.

At Yale, Ms. Bolin was one of three women in her class and the only black person. In an interview with The New York Times in 1993, she said that a few Southerners at the law school had taken pleasure in letting the swinging classroom doors hit her in the face. One of those Southerners later became active in the American Bar Association and invited her to speak before his bar group in Texas. She declined.

In 1937, six years after her graduation from Yale, she applied for a position in the New York City corporation counsel’s office. An assistant there was initially dismissive, but the counsel, Paul Windell, walked into the office and hired her on the spot. She was assigned to Domestic Relations Court, renamed Family Court in 1962.

On July 22, 1939, she was told that Mayor La Guardia wanted to see her at the New York City building at the World’s Fair, which had just opened. She worried that she was going to be reprimanded. Instead, she was sworn in as a judge. The ceremony made news around the world.

In an interview with The New York World-Telegram the next day, she said she hoped to show “a broad sympathy for human suffering,” adding, “I’ll see enough of it.”

Her cases included homicides and other crimes committed by juveniles; nonsupport of wives and children; battered spouses; neglected children; children in need of supervision; adoptions; and paternity suits. She chose not to wear judicial robes in order to make children feel more comfortable.

After her retirement, she was a volunteer reading instructor in New York City public schools for two years, and was appointed to the Regents Review Committee of the New York State Board of Regents.

She was outspoken on civil rights issues of many kinds. When she returned to her hometown of Poughkeepsie in 1944 as a judge and something of a local heroine, she pointed out that the city government, schools and hospitals remained segregated.

“Poughkeepsie is fascist to the extent of deluding itself that there is superiority among human beings by reasons solely of color, race or religion,” she said in an interview with The Poughkeepsie New Yorker.

In 1958, speaking on women’s rights, she said, “We have to fight every inch of the way and in the face of sometimes insufferable humiliations.”