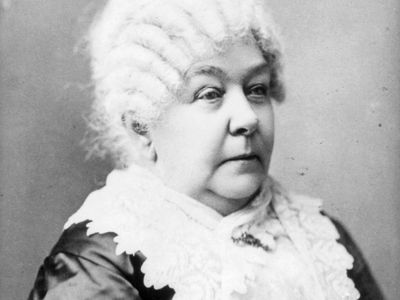 Elizabeth Cady Stanton was one of America’s most influential pioneers for women’s rights. She was born in 1815, at a time when women had very few rights. Nevertheless, Stanton fought for decades to gain women the right to vote and equal access to education and employment.

Stanton is an inspiration to all who believe in gender equality. Her story is one of strength and determination, reminding us that even in the darkest times, hope can prevail. Thanks to Stanton, women today enjoy freedoms that would have been unthinkable in their lifetime. This article tells her story.

Elizabeth Cady Stanton was born on November 12th, 1815, in Johnstown, New York. She was the eighth child of eleven and grew up in a wealthy family. Her father, Daniel Cady, was a successful lawyer and her mother, Margaret Livingston Cady, came from one of the oldest Dutch families in New York State. Elizabeth had a privileged upbringing and was educated at home by tutors.

Despite this, she felt suffocated by the expectations placed on her as a woman and longed for more independence. This desire for freedom made Elizabeth a leading figure in the fight for women’s rights.

What was Elizabeth Cady Stanton known for? Elizabeth was in New York with her cousin Gerrit Smith in 1839. Here she discovered the abolitionist movement and the radical ideas of William Lloyd Garrison. He was calling for an end to slavery. In 1840, Elizabeth married Henry Stanton, an abolitionist lawyer.

The couple had seven children together before Stanton began openly questioning the institution of marriage and whether it was genuinely beneficial for women. In her view, marriage was little more than a legal contract that gave men complete control over women’s lives. Stanton’s views on marriage were controversial, but she remained outspoken on the issue throughout her life.

Why was Elizabeth Cady Stanton important? Despite Elizabeth Cady Stanton being busy with her seven children, she still managed to join the women’s rights movement. In 1848, Stanton attended the first women’s rights convention in Seneca Falls, New York. Her Declaration of Sentiments, modeled after the Declaration of Independence, became the most radical part of the convention.

The document called for equality between men and women in all aspects of life. It included such examples of inequality as

It also called for an end to discrimination in marriage and divorce laws.

While many of these ideas were not new, the declaration of  Elizabeth Cady Stanton  was the first time they had been put forth in such an organized and forceful manner. The Seneca Falls Convention marked the beginning of America’s women’s rights movement.

From that point on, Stanton became one of the movement’s most influential leaders. She worked tirelessly for women’s rights, both in her writing and through her activism.

When Elizabeth Cady Stanton and Susan B Anthony met in 1851, they instantly knew they had found a kindred spirit. Stanton was a 36-year-old mother of seven who had been active in the women’s rights movement for several years. On the other hand, Anthony was a 31-year-old abolitionist who was new to the cause.

But despite their different experiences, the two women quickly bonded over their shared passion for equality. For the next 50 years, Stanton and Anthony would remain close friends and allies as they fought for suffrage. They attended countless rallies and conventions together and wrote innumerable articles and speeches advocating for women’s right to vote.

In 1869, Elizabeth Cady Stanton and Susan B Anthony founded the National Woman Suffrage Association (NWSA), dedicated to securing woman’s suffrage through constitutional amendments. They also founded the newspaper The Revolution, which served as a platform for their beliefs.

The two women had different approaches to securing women’s suffrage but were united in their cause. Stanton was more radical and focused on winning state laws that would give women the right to vote. On the other hand, Anthony believed that the federal government needed to act to secure women’s suffrage.

The work of these two remarkable women eventually paid off. In 1920, the 19th amendment to the United States Constitution was finally ratified, giving women the right to vote. This was a historic moment for Stanton and Anthony, who had devoted their lives to winning this hard-fought battle. American women finally had a voice in their government thanks to their efforts.

In the 1880s, Elizabeth Cady Stanton and Anthony released three volumes of the “History of Woman Suffrage,” which highlighted the discrimination women faced and the progress women had made. Stanton continued to travel and lecture widely into her eighties, although failing health forced her to curtail her activities somewhat.

In 1895, Elizabeth Stanton published “The Woman’s Bible”- a work that critiqued the Bible’s treatment of women. The book caused a split in the suffrage movement, with many members feeling Stanton had gone too far. For Stanton, the publication of “The Woman’s Bible” was a watershed moment.

She had finally put into words what she had been thinking for years- that the Bible was not only biased against women but was actively used to keep them in a state of subordination. Despite Elizabeth Cady Stanton significance, the reaction to the book was swift and divided. Many suffragists saw it as a radical and blasphemous work that would damage their cause. Others praised Stanton for her courage and insight, arguing that the book was an essential corrective to centuries of bias against women.

Elizabeth Cady Stanton was many things in her 86 years on Earth: a wife, a mother, an abolitionist, a suffragist, and a feminist. She was also an author, and in 1898 she published her autobiography, “Eighty Years and More.” In it, she details her life up to that point. In addition, she outlines her thoughts on various topics such as religion, marriage, and divorce.

How did Elizabeth Cady Stanton die? Stanton’s ideas were often met with resistance as a woman ahead of her time. But she continued to fight for what she believed in, even if it meant going against the grain. Finally, in 1902, Elizabeth Cady Stanton died at home in New York City after a long and eventful life. The reason was heart failure, but some say it was because her heart had simply stopped beating for women’s rights.

The organization was founded in 2006 by a group of women inspired by Stanton’s life and work. The organization is headquartered in Seneca Falls, New York, where Stanton lived for much of her life.

The Stanton Heritage offers a variety of programs and resources to the public. These include educational programs, community events, and research resources. The organization also provides a variety of scholarships and grants to individuals and organizations working to promote women’s rights.

You may not know this, but some famous American women had/have the same name as Elizabeth Cady Stanton. Some may know her as the first woman to run for Congress, but did you know that there was also an actress and a with the same name?

Elizabeth Stanton TV host has her show “Elizabeth Staton’s Great Big World.” The show captivated audiences with its creative storytelling approach and emotional portrayal of Elizabeth’s life. The show followed Elizabeth as she navigated through love, loss, and self-discovery. In addition, viewers were captivated by her sincerity and willingness to open up about her life.

So, there you have it! Two famous American women, including Elizabeth Stanton actress, share the same name as Elizabeth Cady Stanton, the first woman to run for Congress. Who knows, maybe one day there will be another Stanton who makes her mark on history.

What did Elizabeth Cady Stanton do? In the end, Stanton was a true pioneer for women’s rights. She helped to start the women’s suffrage movement and worked tirelessly to get women the right to vote. She also wrote many influential books and articles about women’s rights. Stanton was an amazing woman who made a massive difference in the world. We owe her a great debt of gratitude. Thank you, Elizabeth, for everything!